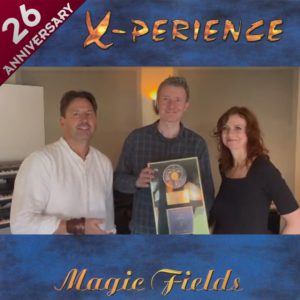 Today is the 26 anniversary of the first album of X-Perience and they have a message for you, We also tell you some historical data and we leave you links to listen to it for free or to buy it! Let's see it!

After the nationwide re-release of the single Circles of Love and the huge success of A Neverending with which the band had crossed borders, fans of the Berlin trio were eager for more of this dreamy music.

The strong chart performance of A Neverending Dream and the high rotation of the video on TV undoubtedly helped the album to reach 22nd place on the best selling albums chart for 11 weeks, reaching gold status in Germany and platinum in Finland.

Magic Fields was a success that saw a thousand different editions, WEA distributed the CD all over the world and even made an exclusive version for Japan. A cassette version was released and with such success, unofficial versions soon followed.

The album included the hits that the public expected to hear, Circles of Love, A Neverending Dream, Magic Fields… but the album was full of songs that filled you with love and kept the level of Hits.

This is where you realise that Magic Fields wasn’t a filler album from a band with the success of the moment.

X-Perience had been writing those songs for years, in fact several of the songs on the album come from the time of Alex and Matthias’ previous band, Metropolis, even though they were remade, they are recognisable, like

The Distance = The Night Moved On

The Fault = The Moon

My Guitar = My Life Goes On

others like Mirror although musically they sound very different, they kept the name.

The producers, Bernd and Ingo had already had some success in the dance scene at the time but also had direct experience of the 80’s music scene, which made them perfect for understanding the style and meaning of X-Perience music.

If there is a debut album in which you can perceive the magic, the illusions, the fantasy, the desires, the dreams and hopes of a band, that is Magic Fields, a perfect album.

Tell us, what do you like most about this album? What do you remember from that time?

Do you still want More info? Then this links are for you!

The complete CD here, to listen to it for free, access to Streaming services, all the photos and a lot of info for each song

We Are What We Are (About us)